Program Dumbarton Oaks Resources Built between 532 and 537, Hagia Sophia (Holy Wisdom, Ayasofya) represents a brilliant moment in Byzantine architecture and art. It was the principal church of the Byzantine Empire in its capital, Constantinople (later Istanbul), and a mosque after the Ottoman Empire conquered the city in 1453.

HAGIA SOPHIA THROUGH FOREIGN EYES IN THE MIDDLE AGES

Hagia Sophia through Foreign Eyes in the Middle Ages

"The church has been made a spectacle of great beauty, stupendous to those who see it and altogether incredible to those who hear of it.." Procopius Think about yourself as a traveler and today's modern tourist in Medieval period and you had a chance to see many of the most interesting and charming capitals around... 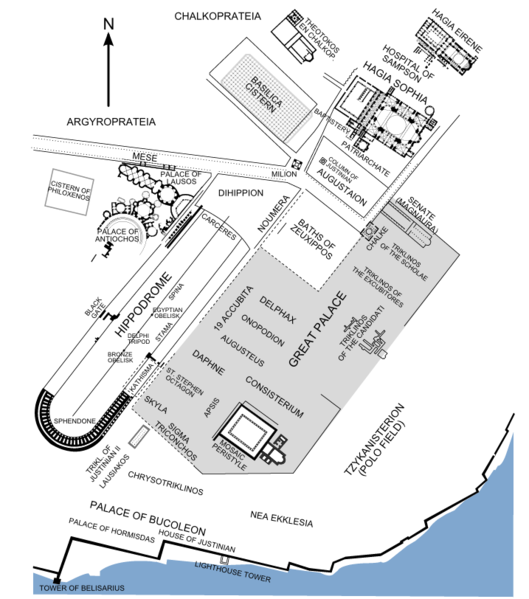 The imperial district of Byzantine Constantinople, with the Great Palace and the approximate locations of its main buildings (based on literary descriptions), the Hippodrome, the Hagia Sophia and the surrounding structures.

(παλάτιον), an official residence, such as the residence of the emperor. The term derives from the Palatium complex on the Palatine Hill in Rome, the only official dwelling of the Roman emperors until the late 3rd C.; subsequently the term entered general use.

During the Tetrarchy and on into the 4th C., establishment of new capitals (Antioch, Milan, Trier) brought about the proliferation of imperial palaces. The Great Palace in Constantinople, begun by Constantine I, is the final product of that age. Other, later palaces built in Constantinople included the 5th-C. Boukoleon and Hormisdas palaces, the 10th-C. Myrelaion palace, the 11th-C. Mangana palace, the 12th-C. Blachernai palace, and the late 13th-C. Tekfur Saray1. Emperors also built palaces away from Constantinople: for example, the 6th-C. Rhegion palace (A.M. Mansel, 6 CEB, vol. 2 [Paris 1951] 255–60) and the 9th-C. Bryas palace (S. Eyice, Belleten 23, no.89 [1959] 79–111).

On the basis of archaeological and textual evidence, the historical development of palace architecture is marked by characteristic changes in the relationship between the building and its urban setting. Initially (4th–6th C.), the complex was open toward the city, continuing Roman practice. Decline of cities (7th–8th C.) brought about the emergence of the fortified palace, reflecting a growing concern for security provided not only by city walls but also by those of the complex itself. In the 13th and 14th C. the urban palaceblock made its appearance. Probably under Western influence, in Byz. (e.g., Mistra) the type was characterized by continued segregation of the building from the urban environment.

Palaces of the Nobility

It is not clear when the nobility began to build palacelike mansions: one 12th-C. historian (Zon. 3:767.6–8) inveighs against the relatives of Alexios I who erected oikoi as large as a polis and luxurious as a palace, while another (Kinn. 266.7–9) relates that dignitaries decorated their mansions with history painting and scenes representing the emperor's hunting exploits. The palace described in the poem Digenes Akritas was an elaborate complex that included a large garden, bathhouse, church, and main building, which was decorated with biblical and classical figures rather than an “imperial” program.Slobodan Ćurčić, Alexander Kazhdan

(ἐκκλησία, lit. “assembly”). The Byz. did not develop a systematic ecclesiology. Instead, for them the church was a sacramental communion that included not only the earthly oikoumene but the Kingdom of Heaven as well, with angels, saints, and God himself: in the words of Isidore of Pelousion (PG 78:685A), a “union of saints hammered out of true faith and perfect behavior.” In general, however, the Byz. church rejected the claims of Donatism and Montanism, whose followers sought to exclude sinners from membership in the church. Sanctity and unity were considered basic features of the church, contrasted with the multiplicity and falsity of paganism and heresy. The unity of the church was underlined by such epithets as katholike (general) and oikoumenike (universal), and its dogmatic correctness by the epithet orthodoxos (of right belief).

Administration of the church was based on patristic texts and the canons of ecumenical and local councils, codified beginning in the 6th C. and regularized in the Nomokanon of Fifty Titles. The Byz. church did not have a single head, rejecting the idea of papal primacy, but embraced the concept of pentarchy in which patriarchs and the pope maintained administrative control of their individual territory. In fact, the loss of the East to the Arabs in the 7th C. and the separation of the West made the patriarch of Constantinople the de facto head of the Byz. church. The Byz. defended the concept that the authority of the council was superior to the power of the patriarch; in an extreme form, an anonymous treatise of the 10th C. tried to justify the superiority of an assembly of metropolitans over the patriarch of Constantinople (Darrouzès, infra 24–29). On the contrary, Niketas of Amaseia defended the thesis that the patriarch was the supreme arbiter in the ecclesiastical sphere. With regard to the state, theoreticians insisted that the church was superior to the civil administration (e.g., John Chrysostom, PG 61:507.42–43), in contrast to the attempt of the state to treat the emperor as the supervisor (“bishop”) of the church's external affairs. The author of the Epanagoge presented the theory of two equal powers, that of the emperor, who deals with material matters, and that of the patriarch, responsible for mankind's spiritual health and salvation. In practice, however, civil administration usually had the upper hand over the church.

As an institution, the church possessed an established organization based on a hierarchy of rank (bishop, priest, deacon, etc.), on administrative gradations (patriarchate-metropolis-bishopric, etc.), on regular assemblies (councils), and on the system of ecclesiastical officials. Its privileges included a special canon law distinct from civil law, and various exemptions for the clergy. The church obtained jurisdiction over the clergy and in some matters over the laity. Its material basis consisted of the ownership of land, imperial grants (solemnia), movable property (esp. liturgical vessels and vestments), and voluntary donations and bequests; the mandatory tithe was a relatively late innovation. Ecclesiastical property was in theory inalienable, and attempts to confiscate it aroused serious conflicts (e.g., the case of Leo of Chalcedon).

Being a holy body, the church could expel sinful members, both temporarily and permanently (by means of excommunication). Missions expanded the church's influence by spreading Christianity to new territories, baptizing heathens and heretics, and converting Jews and Muslims. The Byz. church had no monopoly on education, but it obtained supervision over teaching and offered episcopal posts to many outstanding scholars. Its means of salvation were challenged by some mystics who, like Symeon the Theologian, considered the individual path of vision of the divine light as superior to the activity of the institutionalized church. The political role of individual bishops was significant in secular affairs, but the influence of episcopal organization had to compete with monasteries (see Monasticism) that often managed to obtain independence from local bishops (stauropegion) and even from the patriarch.Timothy E. Gregor

(μονή), complex of buildings housing monks or nuns (see also Nunnery). The term is used primarily for a koinobion, lavra, or an idiorrhythmic monastery. Byz. monastic architecture was standardized at a fairly early date, with many of the common elements appearing at Sohag in Egypt, Qalʿat Semʿān in Syria, and St. Catherine on Mt. Sinai. A monastery was often contained within strong defensive walls, along the inside of which were located the dormitories of the monks, stables, workshops, and storage buildings. These surrounded an open space, with the principal church (the katholikon) at its center. In front of the church was the phiale. One side of the enclosure, most commonly that facing the church, was occupied by the refectory (trapeza). Other buildings could include a bath and an infirmary.

Monasteries varied greatly in size, ranging from a minimum of three (later eight to ten) monks to several hundred (A.-M. Talbot, GOrThR 30 [1985] 4f, 18–20). They were located in both town and countryside but were most numerous in Constantinople and the holy mountains such as Mt. Olympos and Mt. Athos. A. Bryer estimated that about 1,000 different monasteries are recorded in the Byz. sources (SChH 16 [1979] 219f, n.3), about one-third of them in Constantinople (a statistic perhaps skewed by the nature of the available sources).

There were no monastic “orders” as in the West; thus the organization of each monastery varied and was prescribed by its typikon. There were nonetheless some connections between monasteries, for example, between those on the same holy mountain or between a monastery and its smaller affiliated establishments, the metochia. The typika of some monasteries were closely modeled on those of earlier foundations. Monasteries were variously classified as imperial, patriarchal (see Stauropegion), or episcopal, and as private or independent.

In general each monastery had a superior (hegoumenos), steward (oikonomos), sacristan (ekklesiarches), and other officials charged with supervision of the refectory, treasury, and archives. Most monasteries possessed agricultural lands and other properties that provided food for the monks and revenues to maintain the buildings and operations of the monastery. (See also Monasticism.)Mark J. Johnson, Alice-Mary Talbot