The Relational Spiritual Geopolitics of Constantinople, the Capital of the Byzantine Empire

The Relational Spiritual Geopolitics of Constantinople, the Capital of the Byzantine Empire from Political Landscapes of Capital Cities on JSTOR

Strategically located on a peninsula on the European side of the narrow bosphorus strait that connects the Mediterranean and the black Seas (by way also of the ...

Map of Byzantine Constantinople under Constantine, Justinian and Heraclius. Explore Hagia Sophia, the Hippodrome, the Forum of Constantine and other features.

SALT is a partner of Flickr Commons. All visual materials within Flickr Commons and digitized by SALT Research which are accessible via saltresearch.org are shared under the Creative Commons license: This material is provided solely for the purpose of individual research. It can be used under Creative Commons Attribution-NonCommercial-NoDerivatives 4.0 International (CC BY-NC-ND 4.0) license. 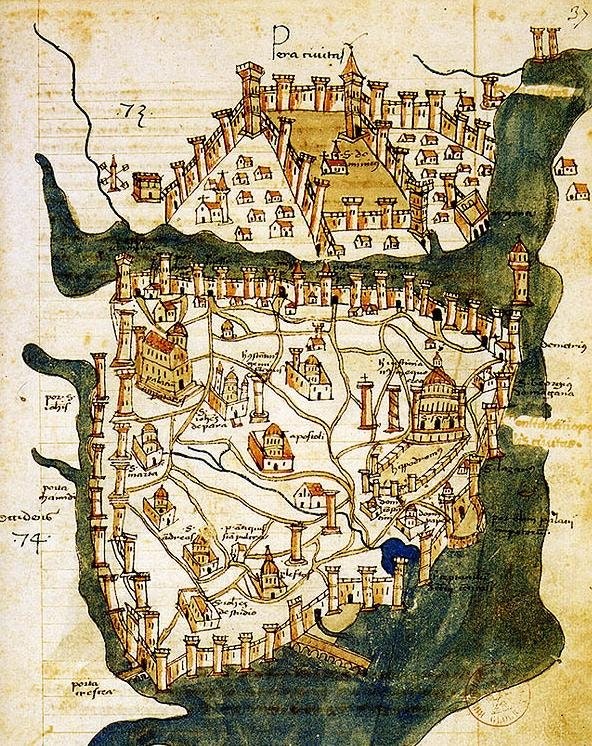 Capital of the Byz. Empire, Constantinople (Κωνσταντινούπολις, Turk. Istanbul) was founded by Constantine I in 324 on the site of the Greek city of Byzantion and dedicated on 11 May 330. The creation of imperial seats of government in the provinces was in line with the policy of the Tetrarchy; Diocletian had already established his residence in nearby Nikomedeia. If Constantine was not satisfied with Nikomedeia, it was probably because he considered Byzantion to be strategically more advantageous. It commanded access to the Black Sea and lay at the juncture of two military highways, the European Via Egnatia and the road leading from Chalcedon to Nikomedeia and points farther east. Yet the site of Byzantion also had the great weakness of being unprotected on the landward side by any natural barrier—a factor that came into play barely 50 years later and posed thereafter a constant threat.

Constantinople was formed by the expansion of Byzantion. The new center of imperial authority, consisting of the complex of the Great Palace and Hippodrome, was placed within the ancient city. From there a colonnaded street, already built by Septimius Severus, ran to the old city gate. Constantine laid out a circular forum outside the gate and continued the main artery (later named Mese) in a straight line westward. About 1.2 km west of the forum a Capitolium was set up. There the street forked, one arm extending southwest to the Golden Gate (near the mosque Isakapı Mescidi; to be distinguished from the Theodosian Golden Gate), the other northwest to meet a new line of walls that described an arc from the Propontis to the Golden Horn, roughly from the modern quarter of Samatya (Psamathia) to that of Cibali. No maritime defenses were put up since at the time there was no threat from the sea.

Constantine envisaged a sharp increase in the population and made arrangements for grain supply from Egypt amounting to 80,000 rations—perhaps a target rather than the figure requisite at the time. Indeed, the population did climb steeply in the 4th–5th C., a process that is reflected in gradually expanded harbor capacity, granaries, and water supply. It is difficult to determine when it reached its peak or to estimate a maximal population figure (opinions have ranged between 250,000 and 1,000,000). Clearly, so large a center of consumption could be maintained only thanks to a complex and potentially vulnerable system of provisioning dependent on Egypt. In addition to the subsidized supply of bread (and oil?) such comforts as were expected in the biggest cities (i.e., luxurious public baths and entertainment in theaters and the circus) attracted people to Constantinople.

The oft-repeated statement that Constantine willed his new residence to have from the start a purely Christian character is not substantiated by the evidence. The old pagan temples on the Acropolis and elsewhere were not disturbed and the Capitolium, which may be attributed to Constantine, had a clearly pagan character. Constantine probably built no more than three churches: St. Irene to serve as cathedral, and two martyria dedicated to local martyrs, St. Akakios (near the Golden Horn) and St. Mokios in the cemetery area outside the land walls. The Church of the Holy Apostles was built by Constantius II next to Constantine's mausoleum.

The Gothic invasion and the defeat of the emperor Valens at Adrianople (378) served to underline the vulnerability of Constantinople and necessitated new defensive measures, esp. to protect the water supply only recently guaranteed by the construction of a network of aqueducts extending as far as Bizye in Thrace and possibly farther west, a distance of some 100 km. It was probably to this end, and not because of a multiplication of exposed suburbs, that by 413 the land walls were extended 1.5 km to the west of the Constantinian circuit. The wide belt of land that was added to the city appears to have been sparsely populated and much of it was taken up by cemeteries. Three enormous open-air cisterns were there—with a total capacity of approximately 1,000,000 sq. m—those of Aetios (421), Aspar (459), and St. Mokios (ascribed to Anastasios I). Somewhat later, a forward defensive line was built from Selymbria to the Black Sea at a distance of 65 km from the city: this was the so-called Anastasian or Long Wall, 45 km long. Fairly effective for a time, it was abandoned in the 7th C. because of the difficulty of keeping it manned and repaired.

The emperors of the Theodosian line made a sustained effort to embellish Constantinople and provide it with further public works such as granaries and the great Theodosian harbor on the Propontis. Simultaneously members of their family and government officials invested heavily in real estate, building for themselves mansions of princely magnificence. The only extant statistical account of the city, the Notitia urbis Constantinopolitanae, dates from this period (ca.425): it describes briefly the 14 urban Regions and lists the principal monuments contained in each one. Twelve of the Regions were within the Constantinian walls; the 13th was at Sykai (Galata), the 14th at an unknown location (Eyüb?) up the Golden Horn. All in all there were 5 palaces, 14 churches, 8 public and 153 private baths, 4 forums, 4 harbors, 52 major colonnaded streets, 322 other streets, and 4,388 domus (substantial masonry houses?). Multistory tenement houses clearly existed, for their height was limited by law to 100 ft., and specific regulations protected the right to a view of the sea, governed the distance between houses, the width of streets, etc. (Cod.Just. VIII 10.12, reign of Zeno). Constantinople was becoming overcrowded.

The second half of the 5th C. ushered in a period of mounting civil strife and frequent fires, the most serious being that of 465, which destroyed about half the city. Circus riots became common: the Nika Revolt of 532 left the center of the city in ashes—allowing Justinian I to indulge his passion for building. Prokopios (Buildings, bk. 1) provides a detailed description of Justinian's (and Justin I's) constructions, which suggests, apart from such public buildings as had to be rebuilt after the fire, a shift towards churches, 33 of which are mentioned. The churches built or rebuilt under Justinian include Hagia Sophia, Sts. Sergios and Bakchos, and St. Irene. Another large church built in the Justinianic period was St. Polyeuktos. The population of the city was, however, gravely depleted, perhaps halved by the plague of 542.

Building activity at Constantinople continued until ca.600, then ground to a halt. In 618 grain supply from Egypt was permanently discontinued. In 626 Constantinople suffered its first siege, the cutting of its major source of water (restored only in 768), and the devastation of both its European and Asiatic suburbs. In 674–78 Arab fleets blockaded it. In 715 Anastasios II, foreseeing another Arab attack, expelled all inhabitants who were unable to lay up provisions for three years: only a shrunken population could have survived the Arab siege of 717–18. In 740 a terrible earthquake threw down a considerable portion of the walls; the catastrophic plague of 747 followed.

Practically no building, other than defensive, is recorded for the period ca.600–ca.780. By the end of the period of Iconoclasm, Constantinople must have had a population of a few tens of thousands living amid the ruins of past glories. Only one public granary appears to have survived, and one harbor (out of four) continued to function for nonmilitary purposes. The great public baths and theaters were abandoned. Limited construction was resumed under Irene; Theophilos repaired the sea walls; Basil I undertook a sustained effort of rebuilding mostly churches that had fallen into ruin (31 are named). The pattern of imperial munificence, already foreshadowed by Justinian, shifted decisively to imperial palaces, churches, and hospices for the poor and the ill; what had earlier been the “civic” sphere was abandoned.

Doubtless Constantinople started to recover in the 9th C., with a gradual rise in population and an expansion of commercial and artisanal activities. The Book of the Eparch, while silent about many crafts, mentions the importation of commodities both from the provinces and foreign countries (silk, linen, unguents, honey, wax, soap). The textile industry was active, but exports severely discouraged. Shops along the main street were beginning to charge high rents (N. Oikonomides, DOP 26 [1972] 345–55). Probably the opening up of the Black Sea by the Kievan princes, for all the dangers it brought (witness the attacks on Constantinople in 860, 941, and 1043), benefited trade. Even so, little was built in the 10th C.

The 11th–12th C. witnessed further expansion. Artisanal occupations became profitable, tradesmen exerted a growing influence on political affairs, and new crafts were developed (e.g., the manufacture of bronze doors), some of which were exported to Italy. Of greater importance was the installation of foreign trading colonies. While the Rus᾽ in the 10th C. were kept at arm's length at St. Mamas on the lower Bosporos, the Amalfitans, Venetians, Pisans, Genoese, Anconitans, and Germans gained concessions along the Golden Horn, opposite Galata, acquiring their own landing facilities, storehouses, and churches. The size of the colony of Latins in the late 12th C. has been estimated at about 7,000 (Hendy, Economy 593f), although much higher figures are given in some sources.

In terms of construction a feature of the 11th–12th C. is the establishment by emperors and members of the aristocracy of great urban “abbeys”—monasteries in name, they also served educational, welfare, and financial functions. Such were the monasteries of the Virgin Peribleptos, of Kosmas and Damianos, of the Mangana, and of Christ Pantokrator, and the orphanage of St. Paul (enlarged by Alexios I), the last so big that a tour of it required a whole day.

The great fire of 1203 and the Latin occupation (1204–61) destroyed the prosperity of the Komnenian city, which was subjected to systematic spoliation. The initial recovery under the Palaiologoi is mostly reflected in further imperial and aristocratic monasteries, some of which survive (St. Andrew in Krisei, the Virgin Pammakaristos, Christ of the Chora, etc.). By the middle of the 14th C. decay had set in. Travelers from abroad (Clavijo, Pero Tafur, Bertrandon de la Broquière, Buondelmonti) describe a partially deserted city contrasting with the bustle of Genoese Pera across the water. When it was stormed by the Turks in 1453, Constantinople probably had a population of 50,000.