Eight Byzantine Shipwrecks from the Theodosian Harbour Excavations at Yenikapı in Istanbul, Turkey: an introduction

Eight Byzantine Shipwrecks from the Theodosian Harbour Excavations at Yenikapı in Istanbul, Turkey: an introduction

First published: Get access to the full version of this article. View access options below. Excavations at Yenikapı in Istanbul, Turkey, related to the Marmaray Project, have unearthed remains of Constantinople's Theodosian Harbour, including 37 Byzantine shipwrecks of 5th‐ to 11th‐century date. 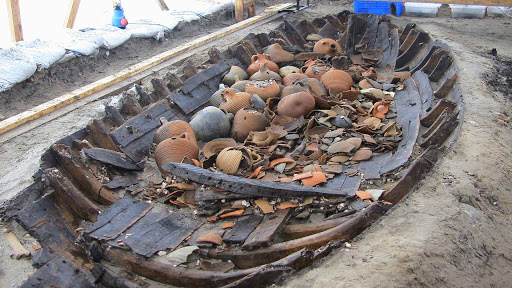 sing. λιμήν). The relatively small size of Byz. ships and the use of a keel that could be lifted meant that a natural harbor (a well-protected bay, a soft sandy bank upon which to drag boats) was preferred to a complicated system of harbor construction. The jagged coastline of the Aegean Sea, Cilicia, western Balkans, and the Black Sea provided Byz. with plentiful places for mooring, so that not only small towns but even individual monasteries (e.g., on Mt. Athos) possessed their own harbors. The larger ports had more complex equipment, including piers and skalai for landing, loading, and unloading ships, as well as shipyards (neoria), breakwaters, chains to seal off the bay as in Constantinople and Thessalonike, and lighthouses. City walls extended close to the sea to prevent attacks from hostile warships. The larger ports functioned as trade centers, sometimes as places where cargo was transferred for land transportation; they were also customs points, and centers of ship construction. A larger port usually was under the command of an archon. Special harbor dues (limeniatikon, katartiatikon, skaliatikon) were paid for use of the port, wharves, landings, etc.

During the late Roman period construction of ports continued: the harbor of Seleukeia Pieria was cleared under Diocletian and rebuilt under Constantine I; Lehmann-Hartleben (infra) lists Alexandria, Patras, Methone, and Aegina as ports reconstructed at this time. The underwater excavations in Caesarea Maritima have discovered the harbor of Herod; the port was rebuilt in the early 6th C. by Anastasios I (R. Hohlfelder, Mediterranean Historical Review 3 [1988] 55–62). After the 7th C. there are few references to harbor construction; in some cases, the threat of pirate raids compelled the transfer of the city center away from the shore, onto a hill; the cessation of dredging work could result in the transformation of an estuary into a swamp. In smaller centers, the coastal emporion was distinct from the polis proper. The major Byz. seaports, after the 7th C., were Constantinople, Thessalonike, Corinth, Monemvasia, Patras, Abydos, Smyrna, Ephesus, Miletos, Attaleia, Dyrrachion, Herakleia in Pontos, Trebizond, Cherson; from the 11th C. onward, Venetian and Genoese colonies were established in some of them. River harbors played no significant role in Byz. Metaphorically, the word limen was used to designate refuge, peace, or absence of persecution.Alexander Kazhdan