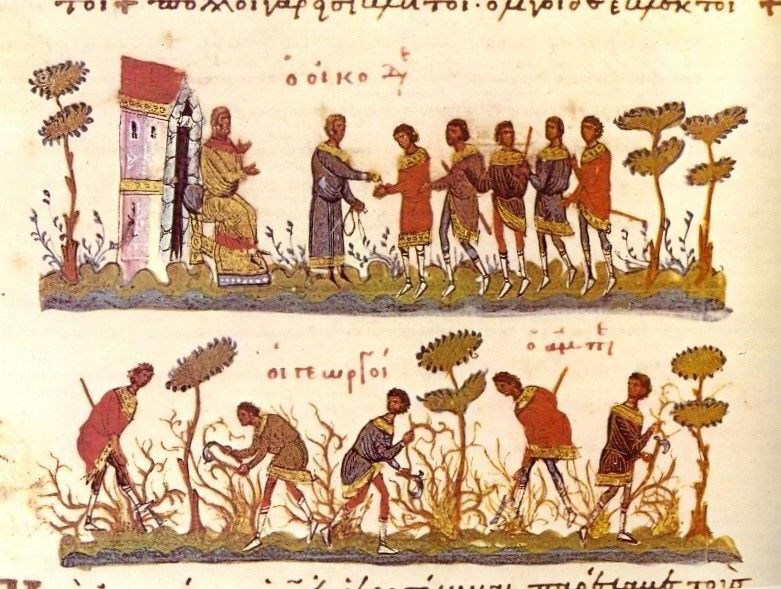 Parable of the Workers in the Vineyard: Workers on the field (down) and pay time (up), Byzantine Gospel of 11th century, Byzantine gospel. Paris, National Library,Cod. gr. 74.

In the broad sense, encompasses the entirety of Byz. culture: thus, T. Talbot Rice's book (infra) includes sections on the imperial court, church, administration, army, etc. In the narrow sense, everyday life is ordinary human activity and comprises diet and costume, behavior and superstitions, entertainment, housing, and furniture. The subject is poorly studied and sources are limited: historiography, rhetoric, and liturgical texts are not very helpful, although they are the best known writings; archaeology provides some scattered data; hagiography, documents, and letters offer only small nuggets of information (P. Magdalino, BS 48 [1987] 28–38). The content of mural and book illustration is of mixed evidential value: the costumes, gestures, and attitudes of protagonists in sacred iconography appear to be conventional and often antique, yet peripheral details in both urban and rural scenes may well reflect current circumstances.

While daily life in late antiquity was municipally oriented and situated primarily in open spaces, Byz. funneled its energy inside closed buildings. A comparison of two great vitae, those of Symeon of Emesa (6th C.) and Basil the Younger (10th C.), reveals the change: Symeon is depicted in the streets and squares, Basil within the houses of his supporters. Public life did not totally disappear—some processions and feasts continued to be held in public—but it was significantly contracted: the theater ceased to exist, religious services dispensed with many outdoor liturgical ceremonies, even races and circus games tended to be replaced by Carnivals and by sports and competitions, such as polo and tournaments, which were on a reduced scale and socially restricted. The shift from reading aloud to silent reading, the adoption of silent prayer, the abandonment of public repentance, the playing of quiet Board Games like chess—all these belong to the same phenomenon of “privatization” of everyday life.

With the exception of churches, there was no new construction of public buildings in Byz. towns, and the regular city planning of antiquity, with squares, porticoes, and wide avenues, was replaced by a chaotic maze of narrow streets and individual habitats. The Houses of the nobility (villas or mansions) also lost their orderly arrangement, which was replaced by a group of irregularly shaped rooms, bedchambers, terraces, and workshops; also abandoned was their openness to nature in the form of the atrium—with its impluvium, inner garden, and fountain—or naturalistic floor mosaics. Houses became darker, and the shift in lighting from lamps to candles after the 7th C. contributed as well to this change.

The increased use of tables and of the writing desk influenced various habits—from reading and writing (including the format of the book) to dining and games. The bed as the symbol of the most private aspect of daily life became consistently distinct from chairs or stools, which were used for more social occasions. Pottery (see Ceramics) grew more uniform and less decorated than in antiquity; it served primarily the private needs of the family, whereas imperial Banquets used gold and silver ware.

A respect for the human body determined the form of ancient costume: the body was covered only minimally and there was no fear of nakedness. Byz. costume, however, which began to adopt the use of trousers and sleeves, was a reaction against the openness of antiquity, and heavy cloaks provided people with additional means of concealment.

Patterns of food consumption evidently changed as well: in the ordinary diet, the role of bread decreased, whereas meat, fish, and cheese became more important. Dining habits changed, too, from a relaxed reclining to the more formal sitting on chairs. While we can surmise that the actual diet was not spare by medieval standards, the predominantly monastic ideology of the Byz. condemned heavy meals and praised ascetic abstemiousness.

Bathing habits also changed: the public baths, which had served virtually as a club for well-to-do Romans, almost disappeared and ancient bath-houses were often transformed into churches. Provincial baths were few, located in log huts full of smoke coming from an open hearth.

The nuclear family was the crucial social unit responsible for the production of goods, so that hired workers (misthioi) and even slaves (see Slavery) were considered an extension of the family; the education of children was also the family's responsibility. The family was limited to a certain extent by the neighborhood, guild, or village community; it was these microstructures that took charge of organizing feasts. Women, who indisputably played a decisive role in the household, were compelled to remain in a special part of the house and to wear “decent” dress, which served clearly to distinguish a matron from the prostitute, whose more revealing costume suggested immoral conduct. The unity of the family was emphasized by the custom of common meals and by the father's right to indoctrinate (sometimes with physical force) all the members of his small household.

Depictions of everyday life are rare as primary subjects in art, although many indications can be gleaned from biblical images in MSS such as the Octateuchs where, for example, scenes of birth, legal penalties, and activities such as threshing and various modes of transportation reflect Byz. practice. A market scene appears in a fresco at the Blachernai monastery in Arta which depicts a procession of the Virgin Hodegetria. It shows merchants displaying their merchandise in baskets and on benches, fruit and beverage vendors, and their customers. By contrast, ceramic household vessels made for everyday use, when they do contain figural decoration of any sort, show scenes from mythology, fable, or epic.Alexander Kazhdan, Anthony Cutler