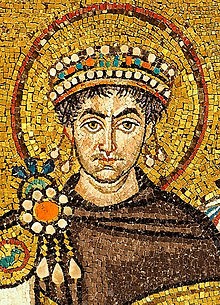 Detail of a contemporary portrait mosaic in the Basilica of San Vitale,Ravenna.

The nephew of Justin I, Justinian made a brilliant career under his uncle, who appointed him co-emperor on 1 Apr. 527. Prokopios of Caesarea describes Justinian as an individual of medium height, with a round face ruddy even after two days of fasting (SH 8.12), an approachable and gentle man who never showed his anger and who, in a quiet voice, would order the death of thousands of innocent men (SH 13.1–3). Justinian was simple in his tastes, indifferent to splendor, able to work day and night, and crafty in displaying sympathy and even tears.

A man of low origin, Justinian came into conflict with the aristocracy. He was surrounded by energetic, unscrupulous, but loyal people who did not belong to the upper crust of society—his wife Theodora, his nephew Germanos, the generals Belisarios and Narses, and the administrators John of Cappadocia and Tribonian. The aim of his policy was to create a strong empire, based on a unified administrative system and a single creed, encompassing the whole Mediterranean and ostensibly brilliant. To this end he promulgated the Corpus Juris Civilis. To increase the state's income, he often guided reform of the tax system: he developed the emphyteusis, tried to eliminate the difference between adscripticii and slaves, and developed land ownership of the fisc. He also subsidized the development of trade and attempted to find new trade routes circumventing Persia. Among secrets acquired by the Byz. under Justinian was that of silk production.

Justinian was personally involved in theological disputes; he sponsored the fifth ecumenical council and pressured Pope Vigilius. Proclaiming the principle that the emperor's will is law, Justinian suppressed political and ideological resistance, quashing the movement of the Samaritans and the Nika Revolt.

He built or reconstructed more than 30 churches in Constantinople alone (G. Downey, ArtB 32 [1950] 262–66) including that of the Virgin of Pege, at the site of a spring whose waters he believed had cured him of a kidney ailment, and above all Hagia Sophia, the altar cloth of which, according to Paul Silentiarios, bore images of hospitals and other foundations of Justinian. Legends concerning his role in the construction of the Great Church, including the revelation of its plan to him by an angel, are collected in the Patria of Constantinople. Justinian's equestrian statue stood in the Augustaion; extant contemporary portraits of the beardless emperor are preserved in S. Vitale and S. Apollinare in Classe in Ravenna. A 9th- or 10th-C. mosaic in Hagia Sophia shows him bearded, presenting his foundation to the Virgin.

Justinian's international policy was intended to restore authority over the western part of the Roman Empire: North Africa was occupied in 533–34, Italy only after a long and costly war in 535–55; in Spain his army was able to occupy only some coastal areas. The situation in the East was more dangerous, and Chosroes I managed to seize several regions; tactics on the Danube were defensive and the empire ensured peace by paying tribute and stationing troops on the frontiers to repel invading bands.

Justinian's evaluation has been contradictory since Prokopios, who sometimes debases Justinian and at other times praises him highly. The problem is whether Justinian attempted to retain obsolete institutions that wasted the resources of his country or established enduring values that laid the foundation for the long existence of a mighty empire. (See genealogical table.) Walter Emil Kaegi, Alexander Kazhdan, Anthony Cutler