This account of the siege and fall of Constantinople was written by Hermodoros Michael Kritovoulos, who was a civil servant working for Mehmed II. He served the Ottomans as the governor of his native island of Imbros from 1456 to 1466, and afterwards lived in Constantinople and became a monk.

The Fall of Constantinople 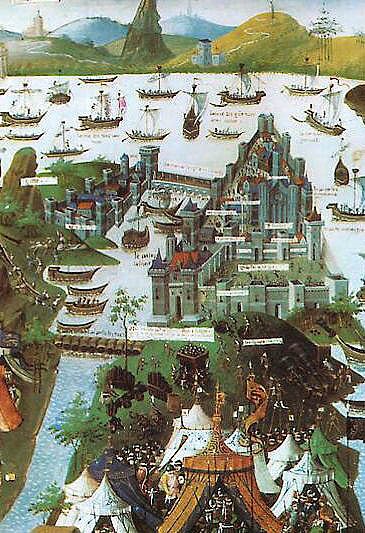 Constantinople, Siege and Fall of

The Ottoman sultan Mehmed II resolved as early as autumn 1451 to attack Constantinople, but officially proclaimed his intent only in Jan. 1453. By 5 Apr., he positioned an army allegedly 80,000–100,000 strong outside the land walls of Constantinople, while an armada of more than 120 ships patrolled the coastal waters. Constantine XI, with the help of the Venetian commune and other foreign allies (notably the Genoese Giovanni Giustiniani Longo), defended Constantinople with 26 warships and fewer than 7,000 fighting men. The Genoese in Pera remained neutral, and schemes of Western Catholic powers to render aid were ineffective.

Mehmed opened the siege on 6 Apr., but his numerical superiority did not bring instant victory. Within a fortnight, the attackers had destroyed the outer wall in the Lykos Valley, using large cannons cast by Urbinus, a Hungarian engineer (see Firearms). The defenders, however, erected a stockade in front of the inner wall and repeatedly fought off enemy advances. Even Mehmed's spectacular penetration of the Golden Horn on 22 Apr. gave him no decisive advantage. Indeed, on 25 May his grand vizier, Halil Pasha, counseled retreat. Mehmed, however, persevered with a final attack on Tuesday, 29 May, about 1:30 a.m.

During the next four hours, two futile charges were made on the landward defenses. Toward dawn Mehmed dispatched the Janissaries to breach the stockade. About an hour later, Constantinople's defenses cracked at two points. A small band of Turks slipped through the unattended Kerkoporta Gate and took control of the Blachernai fortifications. Meanwhile the Janissaries breached the stockade and mounted the inner wall, near the Gate of St. Romanos (Top Kap1). By noon, most of Constantinople was conquered or had submitted; Constantine XI himself fell in battle shortly after the defenses were breached. That afternoon, Mehmed made his triumphal procession to Hagia Sophia; his troops looted the city well into the evening.

Contemporaries rationalized the halosis (“conquest”) of 1453 with a variety of theocentric as well as secularizing explanations. Generally, the event compelled many to reject, reconsider, or refashion the traditional axioms of Byz. political and ecclesiological ideology. As a national tragedy, moreover, it evoked a series of Threnoi, or laments, expressed variously in prose, poetry, and song.Steven W. Reinert