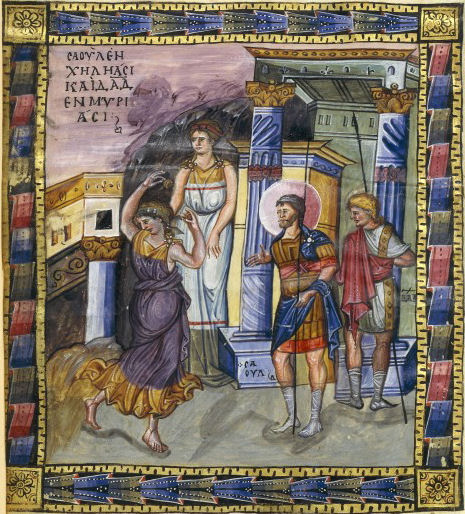 David glorified by the women of Israel, an example of Byzantine dance from the Paris Psalter manuscript. (BnF MS Grec 139), folio 5v

For amusement the Byz. enjoyed games and spectacles such as chariot races in the hippodrome, triumphal processions, visits of foreign dignitaries and ambassadors, religious festivities and panegyreis (see Fair), banquets, and ceremonies that provided recreation and excitement. The streets were also the setting for various kinds of shows with exotic or strange animals and wild beasts. Performances were given by acrobats, jugglers, magicians, actors, and mimes. Apart from this kind of popular entertainment people found recreation in board games such as chess, in gambling, and in various sports. Hunting, hawking, and equestrian sports attracted mostly the aristocracy. The common people went to taverns, where they engaged in dances and jesting, while baths and the theater gradually declined in importance. On certain holidays, like the feastday of Sts. Markianos and Martyrios or the January festival, there was carnival-like masquerading and processions in which even the clergy participated along with the people.Apostolos Karpozilos