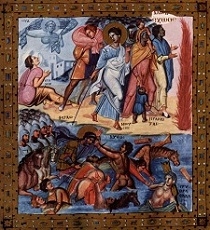 Manuscripts in the Byzantine Collection

Mildred and Robert Woods Bliss acquired the first manuscript for the museum in 1939. Over the years, the holdings have come to include four Greek manuscripts, one Georgian manuscript, three illuminated leaves from Greek manuscripts, one illustrated leaf from an Armenian manuscript, and four papyrus fragments with Greek writing. Further information about these holdings may be found here.Illustrated manuscripts are not simply texts. Neither are they simply a series of images. They are objects which combine text and image into a visual and verbal tool with particular uses and behaviors. We experience books sequentially by turning the pages. We can only experience a real book as openings, and then only one opening at a time. These animated manuscripts allow you to page back and forth through these books as they were intended to be used, and as they were used for hundreds of years before arriving at the museum. The manuscripts in the Byzantine Collection available as digital facsimiles are listed below, along with links to high-resolution images provided by Harvard Page Delivery Service, the HOLLIS catalog records, and further information on the museum website. 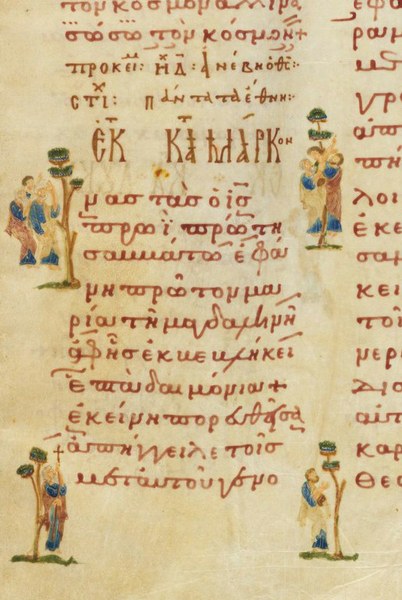 Illustrated manuscripts constitute an important source for Byzantine art, owing to the number of examples surviving across time and the great loss of monumental painting from Constantinople, the seat of the court and center of patronage from the 9th century onward. The history of the Byzantine Empire, more than one thousand years long, is divided into periods that have the benefits and drawbacks of any such divisions of historical epochs. The first period begins with Constantine (reigned 324–337) ruling a still-substantial Roman Empire, and it ends with the liquidation of iconoclasm in 843; by then, the state had been vastly reduced in size, having lost North Africa, the eastern provinces, and all of Italy but the southern part, and was fending off Slav incursions into Greece and the Arabs into Asia Minor. The second period, the Middle Byzantine, sees both a strong economic and a military revival; its end comes with the Latin Conquest and occupation of Constantinople in 1204, though works of the 13th century are often, though uneasily, included in this period. The third and last period begins with the restoration of Byzantine rule under the Palaiologan emperors in 1261 and ceases with the fall of Constantinople to the Ottoman Turks in 1453. Only a handful of illustrated books survive from the first period. It may be that books with pictures were not produced in great number, or at least great enough to ensure that a representative sample survived the ravages of time; also working against early manuscripts, whether illuminated or not, is the revolution that took place in the generations following the end of iconoclasm, when minuscule writing came to replace uncial, quickly superannuating books copied in the old and labor-intensive script. During the late 9th and 10th centuries, manuscripts with elegant ornament and miniatures begin to reappear, and the 11th and 12th centuries witnessed a dramatic increase both in the types and number of books illustrated. Palaiologan illustration reflects the depth of cultural disruption caused by the Latin Conquest, but it can hardly be dismissed as merely a revival, whether that word denotes art making in general or refers specifically to the handful of works that copy or adapt models from the 10th century. Palaiologan illuminators, like monumental painters, created dramatic and emotionally affecting works offering a degree of naturalism unknown in earlier Byzantine art. In doing so they laid the foundation for later painting in Greece, the Balkans, and Russia.

Manuscript illumination is covered in all surveys by the reproduction of a handful of “masterpieces,” such as the Vienna Genesis, Paris Psalter, Joshua Roll, and Theodore Psalter. They are then discussed with ivory carvings and deluxe metalwork objects, a combination that is problematic on two counts. The first is the skewed impression of Byzantine material culture inevitably produced. The second is that ivories survive in limited number and from a narrow period of time and that costly metalwork objects are rare, but illuminated manuscripts survive in the thousands; their range and use can hardly be grasped by a dozen exceptional works. Beckwith 1968, a brief handbook, is a chronological survey of sculpture and painting from the 4th century through the 15th. Mathews 1998treats all media, including architecture, in a survey that is thematic rather than strictly chronological. Volbach and Lafontaine-Dosogne 1968 covers all media and is especially rich in the treatment of the lands bordering the Byzantine Empire, which are not an issue here. Lazarev 1967 treats the period from Constantine to the fall of Constantinople in 1453 and limits its discussion to painting, which is the author’s strength, as is the rich documentation he compiled. This text is nearly five hundred pages long, supported by 576 illustrations. Lowden 1997 is a concise handbook of Byzantine art from the early Christian period to the fall of Constantinople.