Icons and Iconoclasm in Byzantium by Sarah Brooks 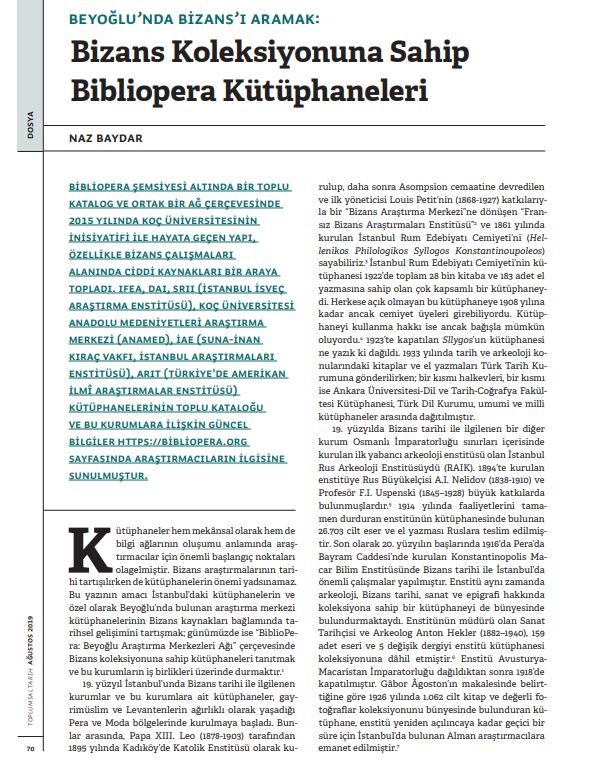 The term eikon was ambiguous, applied even to ancient statues, while other terms of pagan vocabulary, such as stele or agalma, could be used for images of Christ. On the other hand, the Byz. tried to contrast eikon with eidolon (idol), which was an embodiment of pagan cult; sometimes, however, the difference between them disappeared as in the story about a heathen ektypoma that turned out to be an image of the Archangel Michael (Malal. 78f).

Christianity inherited a hostile attitude toward images from the Old Testament prohibition of Exodus 20:4 (“Thou shalt not make … any graven image”) and from the era of persecutions, when Christians were forced to sacrifice in front of imperial images. Many early church fathers (e.g., Eusebios of Caesarea, Epiphanios of Cyprus) disapproved of icons, esp. those of Christ, since he should be worshiped as an “image (eikon) of the invisible God.” Nevertheless, Christians decorated their Catacombs and eventually their churches with images that were considered to be holy. Church fathers such as Basil the Great defended the veneration of images as offered not to the picture but to the prototype (PG 32:149C).

The dispute became acute in the 8th and 9th C. during the controversy over Iconoclasm. The Iconoclasts argued that portrayal of Christ leads either to Nestorian separation of humanity from divinity or Monophysite confusion of humanity and divinity; they considered the eucharistic elements as the only proper “icon” of Christ. Iconophiles, the defenders of icon veneration (primarily John of Damascus, Theodore of Stoudios, Patr. Nikephoros I), developed Basil's idea and elaborated the concept of three levels of image: Christ as the natural image of the Father; man as the divine image by adoption and imitation; and the icon as an artistic image of Christ or the saints. Consequently, they also developed a terminology to differentiate the veneration of icons: they distinguished the relative veneration (timetike/schetike proskynesis) of the icon and saints from the genuine worship (latreia) of the object depicted and stressed that the purpose of veneration was to arouse devotion. Attacking the Iconoclasts, they connected the latter's anti-iconic attitude with Manichaean (Paulician) and Jewish tenets. John of Damascus emphasized the didactic role of icons, esp. for the illiterate, whereas the Letter of the Three Patriarchs and saints' vitae describe the wondrous power of icons, which could heal the sick and bring retribution on assailants.

The principles of icon veneration were summarized at the Second Council of Nicaea (787), which, however, laid greater emphasis on the tradition of miracle-working icons (such as the Mandylion and other Acheiropoieta, likenesses “not made by human hand”) than on theological subtleties. Doubts about icon veneration remained alive even after the defeat of Iconoclasm. 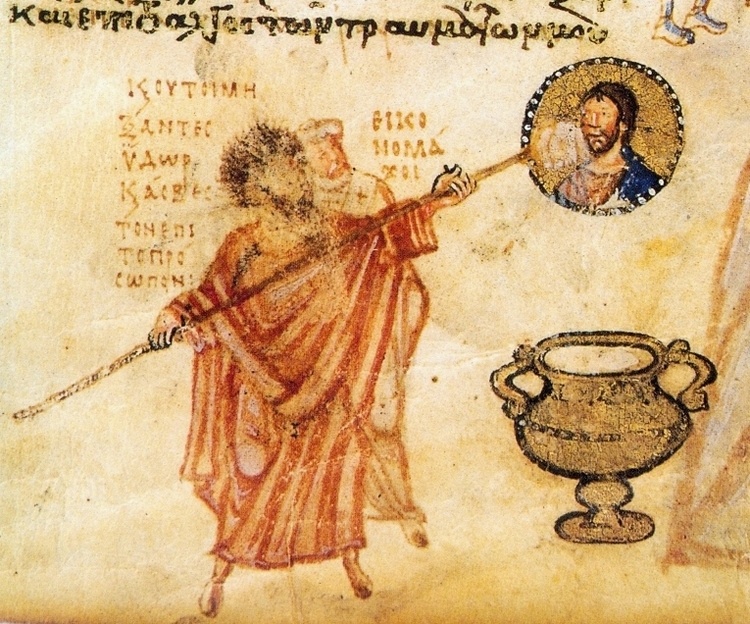 (from εἰκονοκλάστης, “imagedestroyer”), a religious movement of the 8th and 9th C. that denied the holiness of Iconsand rejected icon veneration. Clerical opposition to the artistic depiction of sacred personages had its roots in late antiquity (Baynes, Byz. Studies 116–43, 226–39). In the 4th C. Eusebios of Caesarea, evidently drawing on the christology of Origen, denied the possibility of artistically delineating Christ's image (G. Florovsky, ChHist 19 [1950] 77–96). There was also an Iconoclast movement in 7th-C. Armenia (Alexander, History, pt. VII [1955], 151–60). In the early 8th C. several bishops in Asia Minor, notably Constantine of Nakoleia and Thomas of Claudiopolis, condemned the veneration of images (G. Ostrogorsky in Mél. Diehl 1:235–38), citing traditional biblical prohibitions against idolatry. Their views became a movement when Emp. Leo III began to support their position publicly in 726 (Anastos, “Leo III's Edict” 5–41). His order to remove an icon of Christ from the Chalke gate caused a riot. In 730 Leo summoned a silention that forced Patr. Germanos I to resign and issued an edict commanding the destruction of icons of the saints. Persecutions under Leo appear to have been limited to instances of destroying church decorations, portable icons, and altar furnishings; there is no solid evidence of martyrdom.

The usurper Artabasdos temporarily restored icon veneration, but Constantine V broadened the theological base of Iconoclasm by personally writing treatises and organizing silentia. Constantine introduced an explicit christological aspect into Iconoclasm by asserting that a material depiction of Christ—who as God is uncircumscribable—threatened either to confuse or separate his two natures. In 754 Constantine summoned a council in Hieria, which condemned icon veneration as diabolical idolatry and insisted that the Eucharist was the only appropriate, nonanthropomorphic image of Christ. Constantine reportedly rejected worship of Relics and attacked the cult of Euphemia of Chalcedon, but the 754 council affirmed the efficacy of the intercession of saints and denied only the propriety of venerating them through material depictions.

The acts of the 754 council were not strongly enforced until the 760s, when several Iconophiles were executed, including Stephen the Younger. Constantine rigorously persecuted Iconophiles in Constantinople, esp. monks; strategoi such as Michael Lachanodrakon extended this antimonastic campaign into the provinces. Yet outside the capital Iconoclasm was irregularly supported and often restricted to redecorating churches with secular art. In the capital, according to the vita of Stephen the Younger, Constantine replaced pictures in the Church of the Virgin at Blachernai with “mosaics [representing] trees and all kinds of birds and beasts. …” Yet images of Christ and the saints remained in the sekreta of Hagia Sophia, Constantinople, until 768/9, when Patr. Niketas I (766–80) had them removed (Nikeph. 76.21f). Iconoclasm waned after Constantine's death: Leo IV persecuted only a small group of officials in Constantinople in 780, and in 787 Constantine VI, Irene, and Patr. Tarasios secured an official condemnation of Iconoclasm at the Second Council of Nicaea.

The emperors of the Amorian dynasty revived Iconoclasm, but it lacked the vigor of the 8th-C. movement. Leo V deposed Patr. Nikephoros I and summoned a synod in 815 that renounced the restoration of icons and rehabilitated the Hieria council (P. Alexander, DOP 7 [1953] 35–66; idem, History, pt.IX [1958], 493–505). Michael II, although an Iconoclast, did not force the issue. Theophilos, influenced by John VII Grammatikos, prohibited the production of icons and persecuted prominent Iconophiles, including Euthymios of Sardis, Theodore Graptos, and the painter Lazaros, but in 843, EmpressTheodora and Theoktistos engineered the Triumph of Orthodoxy. Although several church councils in the 860s and 870s condemned Iconoclasm again (F. Dvornik, DOP 7 [1953] 67–97), it was no longer a major issue.

While Byz. sources blame external factors like Jewish magicians and Caliph Yazīd II for influencing Leo III and his supporters, modern scholarship offers various explanations for the development of Iconoclasm. Many specialists favor an ideological interpretation: Iconoclasm was the revival of ancient polemics against religious art (Alexander, Patr. Nicephorus 6–22), which harbored vestiges of paganism (Martin, Iconoclastic Controversy); Leo III was attempting to purify religious doctrine and practice because God was punishing the Byz. for idolatry by sending Arab attacks and natural disasters, such as an earthquake on Thera in 726 (C. Mango in Iconoclasm 2f). Other scholars emphasize economic motives: the emperors used Iconoclasm to confiscate monastic and ecclesiastical property (M.Ja. Sjuzjumov, Učenye zapiski Sverdlovskogo gosudarstvennogo pedagogičeskogo instituta 4 [1948] 48–110). More recently, scholars have stressed the role of imperial power: Iconoclasm was the climax of Caesaropapism (G. Ladner, MedSt 2 [1940] 127–49); the reestablishment of the traditional imperial cult (L. Barnard, Byzantion 43 [1973] 13–29); or the effort of emperors to establish their authority in ecclesiastical matters at a time when they were under pressure to regenerate Byz. society and ward off its external enemies (J.F. Haldon, BS 38 [1977] 161–84). Another explanation considers Iconoclasm against the backdrop of the crisis of early Byz. Cities: for the secular clergy, particularly bishops, the potentially centrifugal nature of the cult of saints—physically localized and emotionally privatized by holy men, icons, relics, and monasteries—threatened their ability to retain a centralized ecclesiastical authority that could define the holy and shore up the weakened structures of Byz. civic life (P. Brown, EHR 88 [1973] 31f).

Economic and political factors played important roles in the development of Iconoclasm, but the central issue of the controversy was the doctrine of Salvation. By the 8th C. the Orthodox victory in the dispute over Christ's human and divine natures had affirmed the possibility of man's ascent to God, but without delimiting the instrumentality of salvation or the position of the holy in Byz. society. Iconoclasts were genuinely concerned that increasing devotion to icons, by effacing the distinction between the material image and its spiritual prototype, was encouraging idolatry (E. Kitzinger, DOP 8 [1954] 82–150) and thus blurring the crucial distinction between the sacred and the profane. The Iconoclasts accepted only the Eucharist, the church building, and the sign of the cross as being fully holy, because only those objects had been consecrated by God directly or through a priest and were thus capable of bringing human beings in contact with the divine, whereas icons and relics were illegitimately consecrated from below by popular veneration (Brown, supra).

The outcome of Iconoclasm was a partial victory for both sides. The Iconophiles, aided by thinkers such as John of Damascus, won the theological battle by formulating a theory of images that regarded Icons as efficacious vehicles of the holy and having it formally endorsed as Orthodoxy. Yet the Iconophiles owed their triumph to sympathetic emperors, whose authority over church affairs was thereby strengthened. In particular, imperial jurisdiction over monasteries was established: strong, centralized monasteries (see Stoudios) were undermined and increasingly replaced by smaller, less cenobitic monasteries under state patronage and control. Moreover, religious dissidents (see Theodore of Stoudios) failed in appeals to Rome to counter imperial efforts to dictate religious policy. The flight of many active monastic Iconophiles to the West permitted conformists like Photios and Euthymios to hold the patriarchate. Among other consequences, the Iconoclasts' reliance on nonrepresentational religious art contributed to the exaltation of the cult of the Cross (J. Moorhead, Byzantion 55 [1985] 165–79), while in the West imperial support for Iconoclasm provoked denunciations from popes Gregory II and Gregory III and pushed the papacy further toward dependence on the Franks (see also Libri carolini).

Hollingsworth, Paul A., and Anthony Cutler. "Iconoclasm." In The Oxford Dictionary of Byzantium. : Oxford University Press, 1991.

Books on Byzantine Icons and Iconoclasm