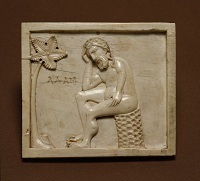 (λιθοξοϊκή, γλυπτική). Sculpture in the round was largely reduced to relief in Byz., with the exception of imperial statuary and that of dignitaries; the last honorific statue to be erected in Constantinople was that of a cousin of Emp. Herakleios ca.614 (Mango in Aphieroma Svoronos 1:30f). The disappearance of statuary may be connected with a gradual process of dematerialization, also evident in sculpture intended for gardens or tombs. Relief portraits appear already on early imperial monuments: the Arch of Constantine, the columns of Theodosios I and Arkadios, and the Obelisk of Theodosios I, offer examples of high-quality relief.

Tombs containing sarcophagi or sarcophagus slabs provide the best recorded group of 4th- and 5th-C. sculpture, with Rome and Ravenna as the main centers of production; Alexandrian workshops furnished the imperial porphyrysarcophagi. Church furniture, including ambos, ciboria, and episcopal thrones, is closely related to architectural sculpture and was often exported from the same Constantinopolitan workshops all around the Mediterranean. Peripheral workshops included Thessalonike, an ambo from there (J.-P. Sodini, BCH 100 [1976] 493–510) being an outstanding example with figural decoration. A gradual shift from the Graeco-Roman heritage toward truly Byz. forms, with a new ornamental vocabulary partially indebted to Sasanian influence, appears in architectural sculpture (Church of St. Polyeuktos) in the time of Justinian I.

From the 8th C. onward, sculpture in the round was no longer being created, although Byz. writers (the anonymous author of Parastaseis syntomoi chronikai, Niketas Choniates) continued to notice Constantinople's heritage of bronze statues. A new type of monumental sculpture appeared in 10th-C. Constantinople—the relief icon, many extant examples of which were transported to S. Marco, Venice. The development of architectural sculpture can be found in numerous monuments in Constantinople, along the coast of Asia Minor, and in Greece. Late 9th–11th-C. templa, capitals, cornices, slabs, icon frames, and doorframes display a limited vocabulary of crosses, geometric patterns, stylized floral ornament, a few animals or birds, and bosses. From the 12th C., however, a resurgent interest in sculpture is accompanied by increased plasticity and a repertory that now included mythological subjects, heraldic compositions, and animal combat, the human form being only rarely employed, mainly in Palaiologan Constantinople (H. Belting, MünchJb3 23 [1972] 63–100). The same ornamental repertory is adopted in the rare preserved examples of church furniture and the numerous funerary monuments of the period, mainly built sarcophagi faced with marble slabs. A more ambitious type of funerary monument, dressed in marble, appears in 14th-C. Constantinople, with rich sculptural decoration around the arch of the niche (Ø. Hjort, DOP 33 [1979] 248–63). (See also Oxyrhynchus Sculpture.)