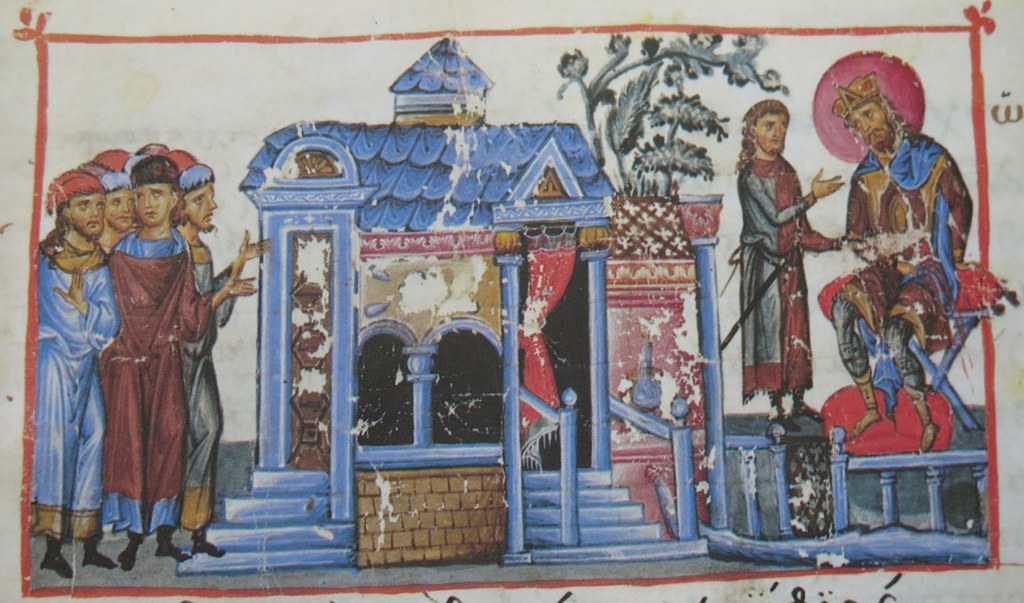 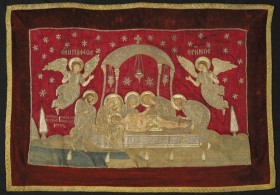 The Museum’s Textile Collection includes about 1,000 textiles, mostly ecclesiastical, from all over Greece, the Balkans and Asia Minor, which date from the fifth century up to the twentieth. The collection was built around the Christian Archaeological Society’s collection of textiles. It was gradually augmented by gifts, purchases and by the influx of the so-called “Refugees’ Heirlooms”, that is to say artefacts belonging to the Greek communities from Asia Minor and Eastern Thrace which came to Greece after the Asia Minor Disaster of 1922 and as a result of the exchange of populations in 1923. The Coptic textiles constitute a special category of their own.  They are associated with the Christians in Egypt, who were directly linked with Byzantium until 641, the year in which the empire lost the Egyptian provinces for good when they passed to the Arabs.  In fact many works are still described as ‘Coptic’ even if they can be dated later than that.  The term ‘Copt’ is derived from an Arabic corruption of the Greek word for Egyptian and is used to refer to an Egyptian Christian. The Coptic textiles were found in excavations of Christian tombs in Egypt and were preserved thanks to the special climatic conditions in the region.  They are mostly made of linen with scenes embroidered or woven in coloured wools. The Byzantine and Post-Byzantine collection consists mainly of ecclesiastical artefacts, priestly vestments and liturgical cloths, made from Western European and Oriental textiles.  Many of them are silks with embroidered decoration and are precious examples of gold-thread embroidery, an art widely practised in Byzantium and which developed in tandem with related arts such as painting, metalwork and sculpture. The earliest examples of gold-thread embroidery are dated to the fourteenth and fifteenth centuries.  The sixteenth and the first decades of the seventeenth century are represented by artefacts which still show their dependence on Byzantine models. The embroidery continues to be flat, whereas later (from the last decades of the seventeenth century up to the end of the nineteenth century) it gives way to a much more sculptural technique in imitation of metalwork. Sometimes the scenes are influenced by Western art and sometimes they are inclined to be more naive in style.   The workshops which have been identified stretch from Asia Minor and the Black Sea to Georgia, Russia and the cities of the Danubian Principalities. It is worth noting that, after 1453 and the break up of the Byzantine Empire, Constantinople remained an important centre for embroidery. The Constantinopolitan embroidresses, who were fully abreast of the latest developments in their art, signed their handiwork, well aware of their worth.  Outstanding examples are the epigonation [knee patch worn as part of a bishop’s vestments] by Despoineta Argyri (1689), another epigonation by Eusebia (eighteenth century) and a hanging depicting the Beautiful Gate by Kokona Rologa/?Kokona the Watchmaker’s Daughter (early nineteenth century). Special mention must be made of the group of embroidered epitaphioi, i.e. the liturgical cloths which are used in the Good Friday ritual (Entombment of Christ).  The collection contains fine epitaphioi from Constantinople, Asia Minor and the Ionian Islands.   Another equally important group of textiles is the collection of antimensia, linen cloths consecrated with holy oil, which are used for the divine liturgy in places where there is no altar (e.g. on ships or in army barracks). Most of them have printed decoration, applied using woodblocks, while some are painted and more rarely embroidered.  They date from the seventeenth century onward.

(ὑφάσματα). Byz. textiles were mainly of linen (linon), wool (erion), and silk. Cotton (bambax, bambakina, bambukina) is more rarely mentioned in the sources, though the cultivation of cotton in the Peloponnesos in the 14th and 15th C. is attested by Plethon (Analekten der mittelund neugriechischen Literatur, ed. A. Ellissen, vol. 4.2 [Leipzig 1860; rp. 1976] 56 and 101, para. 21). These textiles were produced in state weaving establishments, private workshops, and individual households, depending on their type, quality, and use. Alexandria (and Egypt in general) and Syria were particularly noted for textile production before they fell to the Arabs in the 7th C.; Thessalonike, Corinth, Thebes, and Athens are known to have had important textile (esp. silk) weaving workshops between the 10th and 12th C.

Byz. weavers used several types of loom. Only a simple loom was needed for the common linen and woolen cloth (tabby) and tapestry weaves. Patterned compound weaves, preferred for silk but also used for wool, were made on a drawloom with a pattern-making mechanism. Finished woolen fabrics could also be fulled by fullers (knapheis) before being made into clothing by tailors. Few Byz. weaving implements have been preserved, as most were made of wood, but some clay spindle whorls, bronze spindle hooks, and bronze loom combs have been found at Corinth (Davidson, Minor Objects, nos. 1213–33). Bronze needles, opentip thimbles, and clay thread spools used for sewing were also found at Corinth (nos. 1234–98).

A wide variety of textiles is recorded in the sources. Besides the most highly valued silks and purple-dyed cloths (see Blattion), homespun woolens, coarse linens (sabana), and fine linen cloths (lepte othone) are also mentioned (TheophCont 199.22–200.1). The Byz. also manufactured looppile textiles (mallota and linomallotaria), the fleece-like texture of which made them particularly suitable for blankets and covers (P.Ant I 44.8; TheophCont 318.15); they had knotted carpets (nakotapetes; ibid. 319.16) as well.

Ordinary tunics and cloaks were made of plain linen, woolen, or cotton cloth, while silks, often woven with gold threads, were the costume of emperors, the imperial household, and court officials. Linen was needed for sails, nets, and for other commercial and military uses. Household towels, coverings, curtains, and such were made of linen, while blankets, coverlets, and cushions were made of wool.

Hangings, curtains, and carpets executed in various materials and techniques were a regular component of domestic and official architecture, both secular and religious. Curtains fill the spaces between columns in a mosaic representing the palace of Theodoric the Great in S. Apollinare Nuovo in Ravenna (Volbach, Early Christian Art, pl.152). The importance of textiles in an architectural context is revealed in the endless opening and closing of curtains around the emperor and in the imperial palace as recorded in the De ceremoniis. Hangings had a more purely decorative function. Often executed in tapestry technique, hangings were particularly suited for the portrayal of figural subjects, both secular (e.g., the Hestia and the Nereid tapestries in the Dumbarton Oaks Collection, Washington, D.C., ca.6th C.) and religious (e.g., the Virgin in the Cleveland Museum of Art, ca.6th C.). The silk tapestry depicting a triumphant emperor in Bamberg is a rare later specimen of these weavings (ca. early 11th C.). A separate category of textiles comprised those that evolved in the service of church ritual: over time, various altar covers and other liturgical cloths such as the aer, antimension, eiliton, and endyte acquired distinctive shapes as well as specific decoration.

Decoration, whether in the form of ornamental designs or figural composition or both, was an important component of higher quality textiles. Besides the mechanically produced designs of the drawloom weaving, decoration could also be painted, achieved through resist dying, or executed in such ancient textile techniques as tapestry weaving and embroidery. The latter technique was particularly favored in the Palaiologan period.

One of the most noted uses of Byz. textiles, esp. the silks produced in state workshops, was as imperial gifts, regularly distributed on specific official occasions (e.g., De cer. 235.12–13, 258.5–6; TheophCont 342.21) or sent abroad as important instruments of foreign policy.

Byz. textiles have not fared well. Extant examples are scarce, despite the prominence of textiles as reflected in Byz. written sources and as depicted in works of art. Early textiles (before 8th C.) come mainly from Egyptian graves, while later textiles (from 9th C. onward) survive primarily in the church treasuries of Western Europe; most of the latter are silks. Byz. textiles have also been found in Scandinavia and Eastern Europe, esp. Kiev.

Catalogue of the Textiles in the Dumbarton Oaks Byzantine Collection