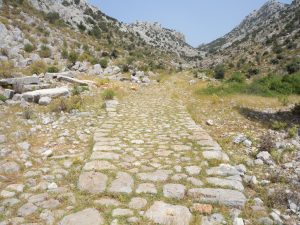 This site is dedicated to research in the field of the Roman road system located in ancient Anatolia, present-day Turkey. The site is sponsored by the History department of Wisconsin Lutheran College under the direction of Dr. Glen L. Thompson and by the Asia Minor Research Center under the direction of Dr. Mark Wilson. The Anatolian Roads Project (TARP) is a work in progress and thus will be updated and improved as time goes on. 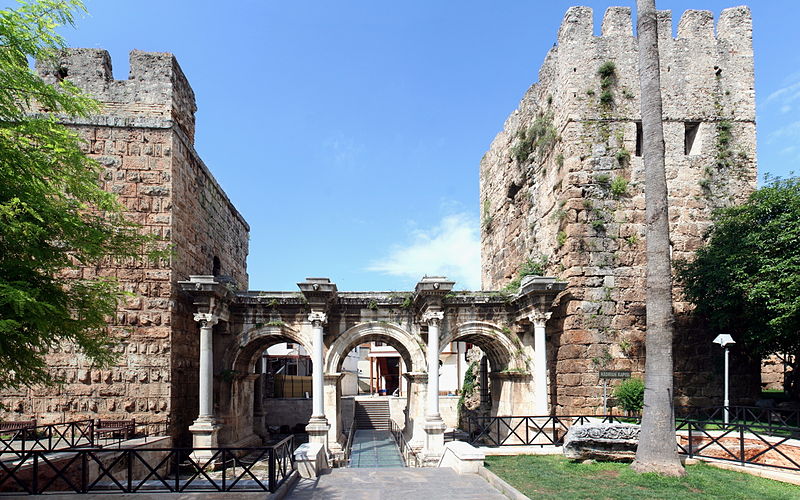 In 133 BC, the kingdom of Attalus III of Pergamum was bequeathed to Rome and reorganized as the province of Asia. This territorial addition provided Rome with most of the western coastal land of Asia Minor (Anatolia, or modern Turkey), extending from the Troad in the north to Caria in the south, including inland Phrygia as well. The fertile agricultural lands and thriving industrial centers of this region were now under Roman control. After Pompey’s campaigns against the pirates of Cilicia in 67 BC and against Mithridates VI of Pontus in 66 BC, the Roman territory in Asia was enlarged to include Bithynia on the Black Sea in the north, Galatia to the east, and Lycia and Cilicia on the southern Anatolian coast.

From 49 BC to the end of the third century ad, the Roman province of Asia extending from the Aegean to the Euphrates remained a single territorial unit, divided into twelve or thirteen sub-districts (each called a conventus, or dioikêseis) named after their chief cities, where provincial courts and assemblies were regularly held. The largely urbanized landscape of the western part of the province was a conglomeration of city territories, ruled by the provincial governor whose seat was at Ephesus and Pergamum. During the first two centuries of imperial rule, the local temple shrines of Didyma and Aphrodisias were lavishly embellished, and the Greek cities in western Asia flourished, as indicated by their impressive architectural remains. The rural interior, in contrast, retained its local character and culture, with the exception of scattered administrative centers. The discovery of the text of the famous Res Gestae Divi Augusti (“The Deeds of the Divine Augustus”) at the temple of Augustus in Ancyra (modern Ankara) is one of the spectacular Roman finds from the heartland of the province. Throughout most of Roman rule, the eastern frontier was the Euphrates River, where legions were stationed at Satala (the XV Apollinaris), Melitene (the XII Fulminata), and Zeugma (the IV Scythica).

In the East, Septimius Severus actually extended Rome’s rule across the Euphrates to the upper Tigris, incorporating two new provinces, Osrhoene, based on Edessa (Urfa), and so-called Mesopotamia, based on Amida (Diyarbekir). In AD 224, however, Parthia came under the new Sassanid dynasty, which took the offensive against Rome, destabilizing the frontier, capturing Emperor Valerian (260), and taking the capital of the Syrian province, Antioch. Although Diocletian (284–305) restored order to the Empire at large, there remained incessant frontier warfare throughout the next century against the Sassanids, and the Romans’ humiliating surrender in 363 of the outlying city of Nisibis, southeast of Mardin, was long remembered. Throughout the fourth and fifth centuries, the fates of the eastern and western empires increasingly diverged. The West fell apart as different German tribes carved out portions for themselves. Rome itself was sacked by the Goths in AD 410. Even North Africa, though protected by the Mediterranean, succumbed to the Vandals, who took Carthage in 439. The deposition of the last Western emperor in AD 476 was more of symbolic than of real political importance, but the Eastern empire, Byzantium, still had a thousand years to run. 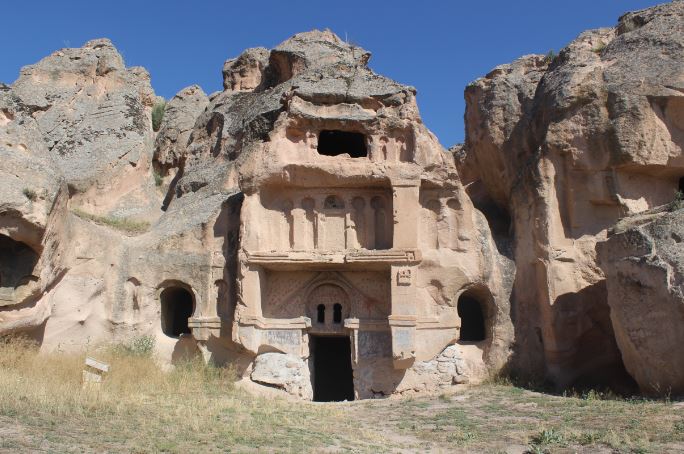 The peninsula that forms the westernmost extension of Asia. It stretches from the Aegean to the Euphrates River and Antitaurus Mountains, a maximum distance of about 1,200 km, and from the Black Sea to the Mediterranean, about 600 km. Its topography is determined by its mountain ranges. In the east they rise in sheer peaks. In the center they occupy the north and south regions of the peninsula, surrounding the relatively arid central plateau, and in the west break up into parallel chains separated by the broad and fertile plains of the Aegean region. The configuration of mountains and plains has influenced patterns of settlement and communication. Wealth and population have historically been concentrated in the western coastal plains, which support extensive agriculture of the Mediterranean type and are well connected by natural land routes that also lead into the interior; the region has many good harbors.

The broken country between the Aegean and the plateau contained many sites strategically located on roads, while habitation on the plateau was scattered along the routes that followed the edges of the central steppe. The adjacent parts of Cappadocia contained several populous valleys, but settlement diminished in the mountainous country to the east, where arable land is confined to narrow and often isolated valleys. The relatively unpopulated mountainous regions, which occupy much of the country, were valuable for their pastures and mineral deposits, as well as for defense of the routes that passed through them.

Asia Minor prospered in late antiquity, when it was divided into two dioceses and 24 provinces. Urban life flourished in the coastal regions and along the roads leading to the frontier; villages enjoyed the benefits of a long period of peace. The population was largely Christian by the 4th C. and thoroughly hellenized by the 6th C. Asia Minor was, however, the home of numerous heresies. Peace was rarely interrupted: the revolts of Prokopios and Tribigild in the 4th C., like the irruptions of the Huns in the 5th–6th C., passed rapidly; the revolts of Isaurians in the 5th C. were a more persistent source of trouble. The reign of Justinian I brought extensive construction of buildings and roads, but the financial demands of his wars drained local resources. Large areas, from Pisidia to Pontos, were afflicted by endemic brigandage and revolt, provoking administrative reforms whose failure was usually due to corruption. The Plague of 542 reduced the population, but some cities and the southern coastal region continued to prosper.

The 7th C. brought fundamental change aggravated by Persian attacks that devastated the country, provoking the ruin of the network of cities upon which social and economic life had been based (C.Foss, EHR 90 [1975] 721–47). The Persians were immediately followed by the Arabs, who failed to achieve any permanent conquest of the peninsula but, through their incessant attacks over two centuries, precluded any possibility of recovery. The loss of Syria, Palestine, and Egypt to the Arabs meant that Asia Minor became the heartland of the medieval empire and its main bulwark against threats from the east. In order to survive, therefore, it received an extensive network of fortifications and its administration was militarized in the system of themes. Arab raids nevertheless struck through the country, culminating in the sieges of Constantinople from 674 to 678 and 716/17 and the capture of Amorion in 838.

During the 8th C., Asia Minor was a center of Iconoclasm and became ethnically diverse as Slavs were brought in to settle regions devastated by the Arabs or recurrence of the plague. At this time, the army dominated the country; in the 9th C., the themes of Asia Minor had a total force of about 70,000. Strategoi and their subordinates ruled provinces and cities; cities were often under the joint administration of a strategos and a bishop. Most large ancient cities had disappeared, replaced by smaller fortified towns and castles; eventually, new cities rose to prominence on account of their strategic locations. Most of the population lived in villages, with a fortress for refuge nearby. Some commerce still continued, esp. to serve the need of capital and army; regional fairs, often celebrated on the feast day of a saint, provided local stimulus.

Byz. moved on the offensive in the mid-9th C., gradually pushing back the frontier and establishing a peace and security that prevailed to the mid-11th C. Expansion eastward brought significant ethnic and economic change as immigrants from Syria and Armenia settled previously desolate regions and as magnates, whose families played an ever-increasing role in politics, took over extensive tracts of land. Civil wars precipitated by their rivalries caused widespread disturbance in the late 10th C.

The Turks, whose raids began striking into Anatolia in the mid-11th C., brought the next fundamental change, in which the region, previously united, was divided between two or more powers. After the battle of Mantzikert in 1071, the Byz. permanently lost control of the east and center; thereafter they were precariously confined to the coastal region, where their position was seriously threatened by the Seljuk Turks. Although the First Crusade pushed the Turks back onto the plateau and allowed Alexios I to mark further gains, no part of the country was free from attack during his reign. John II frequently fought in Asia Minor, consolidating Byz. control by building strategic fortresses and establishing a foothold on the edge of the plateau. Under Manuel I, who restored security to many regions, the frontier was threatened by the immigration of Turkoman nomads. In an effort to solve the problem by striking directly at the Seljuks, Manuel met disaster at Myriokephalon in 1176. In the 1180s and 90s, major frontier forts fell and the Turks advanced westward, helped by the troubles attendant upon the Fourth Crusade.

After the fall of Constantinople in 1204 the Laskarids of the empire of Nicaea established an equilibrium with the Seljuks and secured their territories (the Aegean region and Bithynia) by extensive fortification. The prosperity they brought is reflected in their restoration of towns and foundation of monasteries. The Byz. recapture of Constantinople in 1261 was a disaster for Asia Minor: imperial attention shifted to the west and frontier defenses were neglected just as the weakening of the Seljuk state before Mongol attack left the Turkomans free to move westward. The Byz. position in Asia Minor crumbled rapidly; the southwestern coastal region was lost by 1270, the Meander valley by 1284, and most of the interior by the end of the century. In 1300 Byz. controlled only the northwestern coasts and a few fortresses that were islands surrounded by the Turkomans, who by now were establishing their own independent principalities of Aydin, Menteshe, Saruhan, and Karasi. Despite major campaigns, the Aegean region was lost by 1315, and Bithynia fell to the Ottomans by 1337. Subsequently, Byz. maintained only a few ports until 1360, and afterward only the virtually independent enclave of Philadelphia, whose fall in 1390 marked the end of Byz. Asia Minor.