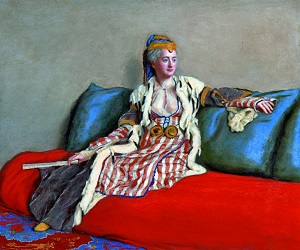 Lady Mary Wortley Montagu was an English aristocrat, writer, and poet, born in 1689.  Later on, she joined her husband - who served as the British ambassador to the Sublime Porte - in the Ottoman excursion, where she was to spend the next two years of her life. During her time there, Lady Mary wrote extensively on her experience as a woman in Ottoman Istanbul.  Lady Mary is today chiefly remembered for her letters, particularly her letters from travels to the Ottoman Empire, which Billie Melman described as "the very first example of a secular work by a woman about the Muslim Orient". Aside from her writing, Lady Mary is also known for introducing and advocating for smallpox inoculation to Britain after her return from Turkey.