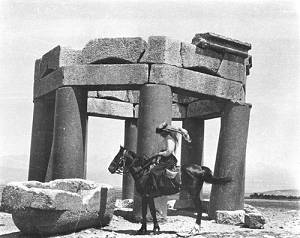 ‘Queen of the Desert’ and the female ‘Lawrence of Arabia’ are just some of the names attributed to the intrepid female traveller Getrude Bell.  At a time when a woman’s role was still very much in the home, Bell proved what an accomplished woman could achieve.  Gertrude Bell became a crucial figure in the British Empire, a well-known traveller as well as writer, her in-depth knowledge of the Middle East proved to be her making.

Over the course of 12 years Bell undertook six major expeditions, on horseback or camelback, through the deserts of what are now Israel, Lebanon, Syria, Jordan, Turkey, Iraq and Iran. Her explorations spawned a number of classic travelogues, notably The Desert and the Sown (1907). She also published several archaeological works on areas unfamiliar to Westerners, including the scholarly monograph The Palace and Mosque of Ukhaidir: a Study in Early Mohammadan Architecture (1914).